Through the eyes of a three-year old

Through the eyes of a three-year old 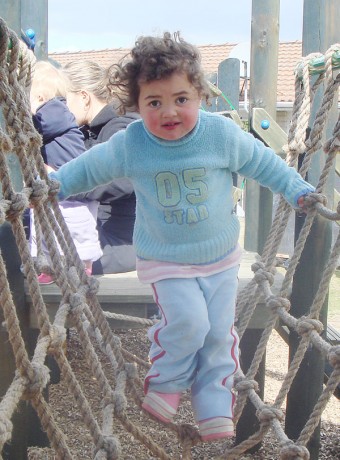 Three is a special age. Children are coming to really enjoy friends, and they can express themselves with new language skills. They share better and are really becoming play partners.

Young three-year-olds can be delightful and sunny. For many, the struggles of the two-and-a-half- year-old are over, and they often become happy, calm, and agreeable to adult suggestions. The typical young three-year-old is eager to please and responds well to praise. Praise children of this age with very specific remarks, such as “I like the way Dylan is sitting, with his hands in his lap.”

Sometimes shy, sometimes fearless, the three-and-a-half-year-old can change from moment to moment. Whining is also common at this age and is best handled by asking for children to repeat themselves in a voice you can better understand. Common fears for three-year-olds include fears of strangers, of the dark, and of animals. It is important to support a child who is fearful. Children may need reassurances about the difference between real and pretend. You might say, “Monsters are pretend, but I understand you are feeling afraid. I’ll be here to keep you safe.”

Friends are becoming important to the three-year-old. Some children have very special friends that they look forward to seeing. Imaginary friends are common at this age. Children of this age talk more with each other than they did before. It is during this year that they begin to talk to other children as much as they talk to adults.

Many three-year-olds begin to be interested in other children’s feelings. Now and then they show moments of genuine concern for the feelings of others. Talk about others’ feelings to help children build on this growing skill. Simple statements like “It hurt when you stepped on his fingers” help three-year-olds understand how their behaviour makes other children feel. With an adult’s help, three-year-olds can begin to solve disputes themselves. They can learn to say, “When I’m finished, OK?” They can also learn to trade toys. By three and a half, children show interest and admiration for other children’s ideas, and they spend more time playing in groups. There is growing give-and-take in play as children listen to each other’s ideas more.

They seem to enjoy imaginative play with others as much as their own play. While children at this age will be open to playing with others besides a special friend, they may begin to exclude other children. “She can’t play with us” or “We don’t want him” are common statements made by three-and-a-half-year-olds. Play usually doesn’t last for long periods of time, and it is best if an adult is nearby to step in when needed.

Young three-year-olds are thrilled by their newfound motor skills. Typically they are good at walking and running, and can turn sharp corners without the mishaps that were common several months before. They are less often frustrated by not being able to do things. Children are better able to climb steps, alternating feet going upstairs, but may still have trouble going down. Threes can jump down from a low height, ride a tricycle using the pedals, and can climb with more surefootedness than the toddler.

Three-year-olds are also enjoying their newfound language skills. They are better able to express their thoughts and needs. Most love new words and are beginning to rhyme and play with words. Threes start to ask questions about the world using words like how, what, where, and why. A three-year-old may even do something he doesn’t want to do if you give him a good reason for it. Three-year-old children engage in magical thinking. They may believe that just thinking about something can make it happen. Children are still coming to understand cause and effect. It helps to talk about cause and effect with children, but most of all they learn this through play.