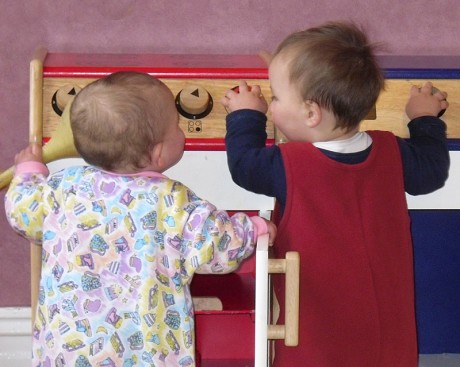 Success appears to depend on having a language plan.

The idea of raising bilingual children is both appealing and possible for more and more families these days, and growing up with more than one language certainly has its advantages in today’s global village.

Bilingualism really isn’t something that simply happens. Raising kids to be successful in more than one language requires some careful planning and learning about bilingual language development.

The reasons for choosing to raise kids with two or more languages are as varied as the families themselves. Even the word “bilingualism” has different meanings for different families. For some families, having the ability to listen in two languages but speak in just one may constitute bilingualism, while other parents expect their kids not only to be bilingual, but also literate in both languages. Whatever the goals for developing bilingualism in each family may be, success appears to depend on whether a “language plan” has been worked out in advance.

Families who take the time to consider how their kids will develop two languages, and who make the necessary commitments to bilingual language development, tend to be more successful in raising bilingual children.

If you’re thinking about bringing up your children bilingually, it’s a good idea to clarify your own definition of bilingualism. Language proficiency can be evaluated in terms of listening, speaking, reading and writing. You could also add a fifth area of speech and language to your definition of bilingualism, in which a person is able to use one or both languages for reasoning. A person may speak only one language but have listening comprehension in two languages. Another may listen and speak in two languages but reading and writing ability in only one.

Families who take the time to discuss their goals for language development often see their kids acquire higher levels of language skills in both languages. Parents need to talk about how bilingualism will be achieved for their children, looking at what language strategies will be used by each parent, what is being taught at school, and what areas need to be emphasized outside of school.

Knowing two or more languages truly gives kids so many advantages in life. Bilingual kids have the advantage of knowing two cultures, of being able to communicate with a wider variety of people, and of possible economic advantages in their future. Research has even shown advantages in thinking skills among bilingual individuals. But deciding to raise bilingual kids is a decision that should be carefully considered as it affects children for the rest of their lives. Becoming bilingual is a special gift parents can offer their children, but the gift must be planned and presented with care for it to be well used and appreciated.